Why Nigeria Must Borrow A Leaf From Songhai Integrated Farm

LAGOS – Nigeria, as a country is blessed with everything its takes to do well agriculturally, but she is yet to take full advantage of its vast agricultural potentials to transform its fortunes.

One of the ways Nigeria can use agriculture to transform its fortune is to embrace Songhai integrated farming which has been adjudged to be the best farming system in the world.

A typical and leading example is the Songhai Integrated Farms in Republic of Benin, founded in 1985 by Reverend Father Godfrey Nzamujo, a Nigerian and a Microbiologist.

A recent visit to the centre during a study tour by the top executives of the British American Tobacco of Nigeria Foundation (BATNF) which DAILY INDEPENDENT was part of, revealed that nothing is useless as far as waste is concern.

In the centre, nothing is considered as a waste, including human’s, animal, plant and plastic wastes as these would go through processing and are regenerated.

Also, leaves, stems and roots are used to produce animal feeds, soil mulch and compost manure while aquatic plants, such as fibreless plants and water hyacinth are used to generate gas and purify water. 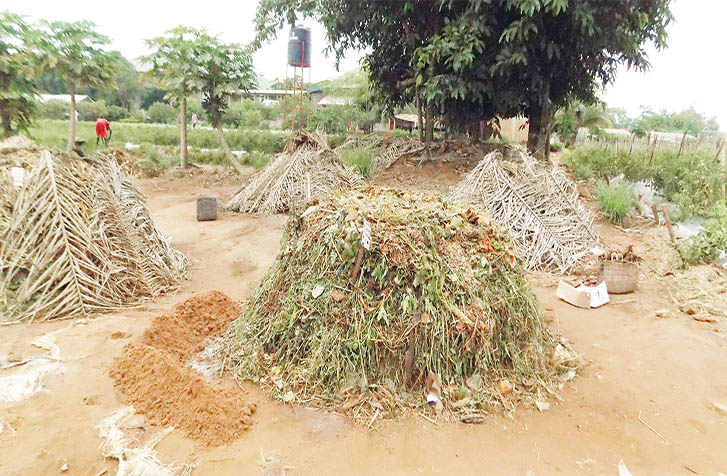 Heap of animal and plant wastes for generating organic fertilizer

In the poultry unit, there are various species such as layers, broilers, turkey, quail, guinea fowl, improved chicken, geese, and ducks among others.

There are also metal workshops, where various farming equipment are built, an industrial zone where the secondary production takes place such as fruit juice, yoghurt, bar soaps, plastic, fish mill among others.

Lazare Dourossimi, a tour guide at the centre said that apart from its headquarters in Porto-Novo, the centre has three other farms in Kinwedji, Parakou and Savalou and all in different areas within Republic of Benin.

He said that the integrated farming was created to kick poverty from Africa, create jobs and especially stop importation of food to the African continent.

“We want people that come here to see and digest this concept and use it in their various rural environments to develop and make their environment economic viable.

“You cannot replicate all what we have in Songhai here; you have to look at your environment before you can do your own Songhai. Look at the problem of your people and see how to find solution. Africans are the ones that will solve their own problem,” he added.

Speaking further, he also reiterated that in this system nothing is wasted.

“This system gathered all the production; plant, animal fish, process all the value chain and in this system nothing is wasted. We recycle everything and all the by- products are used to produce something else.

Speaking further, he said that in the centre there are three stages and they are primary, secondary and tertiary.

Primary, according to him include; fish farming, plant production which is purely organic with no added chemical fertiliser, while the secondary is where value are being added to the various produce to maximize profit.

He said Plant Production, Animal Production, and Fish Farming are key links in the primary production system at Songhai, that all of the things done in each of the sectors energise one another.

“After harvest and/or processing of food crops, vegetable, and perennial crops, the residues (by-products), which are commonly thought of as waste, are reinvested back into the production.

“The by-products generated by livestock- litter and droppings – go to our composting unit where they become raw materials. We turn these animal by-products into compost for use instead of chemical fertilisers to fertilise and maintain the life of the soil on which we grow new food crops for humans and animals again and again. The water that is used to clean the concrete and earthen ponds where fish are raised is recycled and used to irrigate crops.

“In addition to their use in plant, animal, and fish production, residues are valuable raw materials. We add value by using these residues by producing energy (bio-energy) in the form of domestic biogas with use of a gasifier. This bio-energy can be used for cooking, lighting, and heating and without the risk of polluting the environment or damaging eco-systems.”

Dourossimi also noted that at Songhai, organic production is considered the primary sector as it is the engine of rural growth and the basis for the development of the secondary and tertiary sectors.

On the secondary sector, he noted that the centre invested in agribusiness, mechanical and machinery manufacturing as forms of secondary production.

“We process, by ourselves and on site, the products of agricultural production using simple and natural processes and effective technologies that are easily accessible.

“We produce fruit juice such as pineapple, mango, cocktail among others without any form of preservative.

“Our industrial zone also includes facilities for manufacturing unit packaging such as bottles for juices, and other plastic products. To makes these products, we collect plastic wastes from the environment and process them for use in our plastic recycling unit. The latest achievement in our industrial park is a new factory for producing floating pellets for fish. We can produce one ton of these pellets per hour.

Still on the renewable energy, he said that Songahi’s proven experience in the field of biogas is sought by both institutions and individuals for the installation of domestic biogas unit especially in rural areas.

“But we do not limit our actions to biogas production. We also invest in other forms of renewable energy. An example is our gasifiers, which help us to get gas, power, and heat from biomass – residual collected after pruning trees, rice husks, palm kernel cake, among others.

“With the energy we get from this source, we pump water to irrigate our crops in our garden and provide light in our layer pens, as well as several roads in our farm.

Tertiary, according to him include various services been rendered by the centre which include consultancy, training, accommodation, transportation among others.

In the area of employment generation, he said that Songhai Farms employed more than 2,500 people from different countries.

The tourists, during the tour were exposed to the various processes in poultry keeping, techniques of fertilisation, fish farming, renewable energy, crop production, grass cutter keeping agro forestry among others.