Furaha's journey: from fear to farming

Furaha Mwisha points to the scar in her arm where the bullet entered. She was nine when she was shot, in an attack that killed both of her parents.

A refugee from ethnic violence for more than half her life, the 21-year-old Congolese mother says that her life in the UN-run refugee camp in north-western Zambia has been transformed since she started farming with Self Help Africa, more than a year ago. 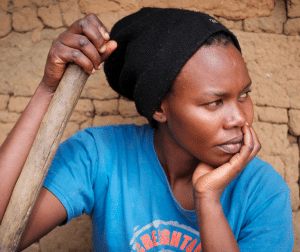 A participant in a ‘graduation programme’ that is helping refugee families to become self-sustaining farmers in Meheba camp, Furaha says that she worked as a day-laborer work in the area before she joined the Self Help Africa project. Now, she has received training, seeds and a small number of animals that she is rearing to both breed and sell.

“For the first time, I have my own farm,” she says. “I have planted groundnuts on a small plot, and am also keeping sheep, goats, and chickens that I will trade.”

Furaha says that she knew nothing about farming until recently. “I was a kid when I ran away. I lost contact with everyone, and believed that all of my family were gone,” she recalls.

Furaha describes her hand-to-mouth life as a refugee in fearful terms, recounts how her nomadic existence took her to Uvira in the far east of the Democratic Republic of Congo, how she was again the victim of an ethnic attack, was raped by rebel warlords, and left pregnant. She lives today with her son, Prince, now aged five.

Taken into care as a vulnerable refugee, she was brought two years ago by UNHCR officials from Uvira over the border to Meheba camp in Zambia, where she joined more than 15,000 displaced people in one of Africa’s oldest refugee camps.

Furaha was in Meheba for a number of months when she had a remarkable reunion with a long-lost brother whom she assumed had been killed.

“I was here a number of months when he saw me. We spoke, and although I had been a young girl when we were separated, we talked about our parents and realized that we were family. He has two young boys of his own, and our two families now live side by side in adjoining huts,” she says.

Furaha attended a number of training courses organized by Self Help Africa and says that in little more than a year she has moved from being a hired hand on other small farms to being an independent farmer in her own right.

Her childhood dreams of becoming a medical doctor are now ‘in the past’, but she says she would like to concentrate on farming successfully, and maybe one day open her own small trading shop.

She has transferred her dreams to her young son, however, and says that she intends to make sure that he gets a good education, and can have the opportunity to study medicine that was denied to her. “After all, I will be old someday, and I would like it if my son was a doctor, and could take care of me,” she says.